What does a conveyancer do?

Conveyancing is the legal process relating to the transfer of the ownership of real estate from the current owner/s to a new owner/s.

Dealing with the steps involved in the purchaser granting a new mortgage over the property to a lender and possibly the discharge of an existing mortgage may also be involved in the conveyancing activity.

This is when the sale agreement becomes binding. A 10% deposit is usually paid.

The balance of purchase money is paid and title transfers to the purchaser.

The land registration details are changed to show the purchaser as the owner.

The way contracts come into existence

There are subtle but important differences between the manner in which contracts come into existence in each State and Territory.

In most jurisdictions, the real estate agent usually conducts the exchange and the negotiations leading to the exchange. However, in NSW and the ACT solicitors/conveyancers are often significantly involved.

Accordingly, in NSW and the ACT there can be much more haggling about the deal after the real estate agent declares a property “sold” and before a binding legal agreement is created.

Steps in the conveyancing process

The contract for sale is a very important legal document. Many disputes arise between vendors and purchasers. Consequently, trained experts should prepare the document. Under various laws, the contract must contain specified documents, certificates and disclosures.

When a potential purchaser decides they are interested in a property, they may make an offer to purchase it. The vendor may accept this offer, or alternatively, the purchaser and vendor may enter into negotiations over the price and conditions of the sale.

Purchasers may decide to pay an initial deposit as a sign of good faith of their interest in the property. The amount of such deposit can vary and will generally be stipulated by the vendor or agent. This will not mean that a binding contract exists or that the property is removed from the market. The payment is simply to show the vendor that the purchaser is serious about their offer.

Note that ‘holding deposits’ will generally be non-refundable.

However, in Queensland, it is unusual for holding deposits to be used except for off the plan sales and it is illegal for such deposits to be non-refundable.

If the vendor later accepts an offer, the vendor and purchaser agree to exchange contracts. At that point, the purchaser pays an agreed deposit amount. The deposit is usually 10% of the purchase price and is held by the real estate agent or the solicitor/conveyancer.

The purchaser should not exchange a contract for sale until they have reviewed the contract with their solicitor/conveyancer.

Note: gazumping is a common practice that can take two forms:

When a property is sold by auction, a purchaser is bound to purchase the property after having made the highest bid at the end of the auction.

It is important for the vendor to have a solicitor/conveyancer examine the sale contract before the auction to make sure that everything is in order. It is also important that a potential purchaser has finance arranged and that all necessary property inspections have been done.

Before auctioning a property, the vendor will nominate a ‘reserve’ price that is not usually disclosed to potential purchasers. The reserve price is the lowest price the vendor is willing to accept. If the highest bid is below this price, the property will be ‘passed in’. The vendor will then either try and negotiate a price with interested purchasers or put the property back on the market.

If bidding continues beyond the reserve price, the property is sold at the fall of the hammer. The successful purchaser must then sign the contract for sale and pay the deposit (usually 10%) immediately.

Purchasers may choose to insure the property before settlement if they are unsure whether the vendor has a current insurance policy. If purchasing a unit under strata title, the purchaser should obtain a Certificate of Currency from the owners' corporation's insurer to make sure the property is adequately insured.

Note that many lenders require evidence of comprehensive building insurance being in place, with the lender noted on the policy as an interested party, as a condition of settlement of the loan for the property purchase.

Note that in Queensland and ACT, the risk passes to the purchaser when the contract is formed.

Step 6 - Exchange of contracts/paying a deposit

The contract will include a significant amount of information, namely:

After contracts have been exchanged, the buyer will have to pay a deposit. Generally speaking, the deposit is 10% of the sale price. However, this can and will vary depending on the circumstances. The remaining balance will be paid at time of settlement.

After exchange and if the purchaser is buying via private treaty, then the buyer will enjoy a cooling off period.

Cooling off does not apply to sales at auction.

The purchaser can use this time to complete final inspections of the property (pest and building) and complete their application for finance.

The time for completion can be set by agreement between the parties.

The time span for completion of “off the plan” purchases can be quite lengthy. This is because the contract can be completed only after the development/building construction has completed and new titles are issued. The standard times for completion are set out in the table below, but these periods can be changed by agreement between the vendor and the purchaser.

What is “time of the essence”?

Time is said to be of the essence of a contract if the contract specifically says so. This means failure by either party to complete on a nominated date is a “breach of a fundamental term”. If there is a breach of a fundamental term, the other party can terminate the contract, forfeit and keep the deposit (in the case of a breach by the purchaser), and sue for damages.

Example: A real estate contract provides for completion “within 42 days of exchange, time of the essence”. If the purchaser does not complete on or before that date, the vendor can terminate the contract, forfeit the deposit, and sue for damages.

Only in Queensland is time normally of the essence, although time can be expressed to be of the essence in any State or Territory.

After exchange, the purchaser’s solicitor/conveyancer will usually send a list of formal questions about the property known as requisitions on title. Requisitions obtain from the vendor information that may not have been previously disclosed or discovered during inspection of the property (for example, disputes with neighbours relating to fences). The standard contracts used in Queensland prohibit the delivery of requisitions on title but instead contain some basic warranties about the vendor's title.

In Victoria, requisitions on title have been replaced by warranties in the contract, in particular General Condition 2 of the approved form of contract. The vendor’s solicitor/conveyancer will reply to these requisitions.

The purchaser’s solicitor/conveyancer will often make some additional searches and enquiries not made before exchange. These searches are to determine a variety of factors, including whether there are general defects in the title, the land is contaminated, or there has been construction on the property. If any of these result unsatisfactorily in a way not disclosed in the sale contract, the purchaser may be able to rescind the contract, sue for damages, or seek a reduction of the sale price.

If the vendor has a mortgage over the property, the mortgagee must be contacted to provide a pay out figure and attend at settlement to hand over a discharge of mortgage and, often, the certificate of title/title deed.

At settlement, “adjustments” will be made. Example: the council rates have been paid for the whole year. The purchaser must pay an additional amount to the vendor for the proportion of the year the purchaser will own the property. Usual adjustments are council rates, water rates, strata body corporate contributions, land tax and rent if the property is tenanted.

The sale is said to settle or complete on the day the purchaser pays the balance of purchase money, plus or minus adjustments, to the vendor.

On the date of settlement, it is important that a final search of the title is obtained to ensure that the property is clear from any interest or restrictions that may have been recorded between the date of exchange and settlement. Usually the solicitors/conveyancers/mortgagees meet and hand over the title documents in exchange for payment.

Note that under the Personal Property Securities Act 2009 (Cth.), if chattels (i.e. goods) are included in the sale of a property, it is important that the PPSA register is checked to make sure that the purchaser receives a clear title to the chattels on settlement.

The purchaser or the purchaser’s mortgagee will register the transfer documents with the Land Titles Office. Usually there will be a:

The Land Titles Offices advise the relevant authorities (such as the local council, water authority and Valuer General’s office) that the property has a new owner.

Note – if settlement does not occur If settlement does not occur on the scheduled date, depending on the contract terms, interest at a rate specified in the contract (often higher than mortgage rates) will accrue from the date specified for settlement to the ultimate settlement date, if the purchaser fails to settle on the due date. In addition to paying interest, the purchaser may be given a notice to complete, making time of the essence. Once the time of the essence date is reached, interest continues to accrue but the vendor can rescind the contract and retain the deposit previously paid.

Conveyancing refers to the process of transferring ownership of real estate from the current owner/s to a new owner/s. For more information, download our guide. 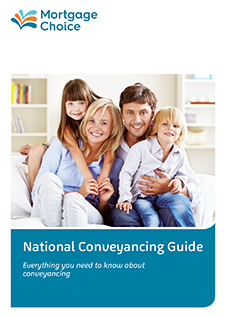 Things can change quickly in the market.

Subscribe and stay informed with news, rates and industry insights.